Edge of Darkness: Solving the Murder of Daphne Rhodes
by Paul Fecteau and G. Stephen Thurston

In the early hours of June 3, 1962, Daphne Bunker Rhodes was murdered in her apartment near 29th and Gage Blvd. in Topeka.  The case has never been solved... 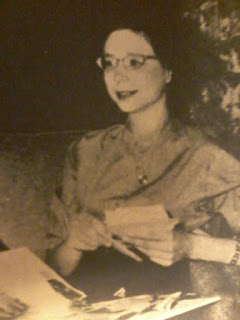 This photo of Daphne was taken by her best friend, Paulette Ames.  The image has been widely reprinted even though Ames has no idea how the photo was provided to the media.

The world-famous Menninger psychiatric hospital in Topeka attracted a clientele that included the aristocratic, the bohemian, and the infamous. These patients had two things in common: they were rich and they didn't fit in with the surrounding culture.

Daughter of a wealthy New York industrialist, Daphne Rhodes had begun to thrive among this colorful crowd of fellow patients, but she did not separate herself from the local community, attending hootenannies at Washburn University and volunteering at the Capper Foundation.

Her murder was almost certainly committed by someone who knew her well.

The ensuing investigation involved both locals in the neighborhood and Daphne’s fellow patients from the clinic, ultimately a dizzying array of odd characters that bewildered Topeka Police detectives, KBI Agents, and an investigator hired by Daphne’s father.

The case went cold, and the mystery endures.

To contact Paul and Steve about the Daphne Rhodes case,
e-mail daphne@paulfecteau.com

Posted by Paul Fecteau at 6:55 AM No comments: