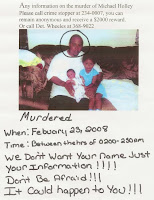 This article originally appeared in the April 1, 2009, issue of tmiWeekly.

Fanning out through Topeka’s Central Park neighborhood, a family tacks posters on light poles and trees. The photocopied image of a young black man, holding an infant and hugging a little girl, appears on the letter-sized white sheets. A circle is drawn around the man’s face with magic marker. Below the photo, a caption, handwritten with the same black marker, reads “Murdered.” The fliers are obviously homemade, the product of a budget far less than America’s Most Wanted, but they remind thecommunity that the family of Michael Holley has not given up on justice.

The family hopes that the photo, which shows Michael with two of his three children, might stir the emotions, motivating someone with information about the murder to come forward. If that strategy falls short, the flier also prominently notes that a $2000 reward is offered.

The family distributed the fliers in the days leading up to the one-year anniversary of Michael’s murder. The 24-year-old Topeka native had walked out of Deep Pockets Pool Hall on 21st Street shortly before 2 a.m. on February 23, 2008. He got into his car. A man approached, pulled a gun, and opened fire. Michael was hit several times and died at a hospital about 40 minutes later.

After shooting Michael, the killer walked to a dark four-door sedan parked nearby and began to drive away. Before he left, however, he fired his gun into the air, sending the witnesses who had gathered around Michael’s car fleeing for cover.

Henry Holley, Michael’s father, believes that that the second round of shots served as a message to the witnesses not to cooperate with police. In fact, Henry thinks many people in the community know who murdered his son but are too frightened to reveal the killer’s identity. That conviction has spurred him to tirelessly publicize his son’s case.

Aside from imploring witnesses to be forthcoming, Henry has also shared with reporters his theory that his son’s murder is connected to the deaths of a series of black men slain in the city last year: 25-year-old David Wakes, a relative of Michael’s, who was shot in late April and 17-year-old Farrell Sanders who was shot in early May.

The Holley family even created a My Space page on the Internet dedicated to Michael. The police ultimately asked that the page be taken down due to concerns regarding information that could jeopardize a prosecution. The most inflammatory material on the site appeared in comments posted by anonymous visitors. These posts included some that named a particular individual as the killer. Even with the My Space page no longer online, comments posted on stories on the sites of local television stations continue to accuse this local man, including some posts which call him a serial killer, claiming he is also responsible for the murders of Wakes and Sanders.

Despite these accusations leveled anonymously on the Web, the Holley family worries that the witnesses who could really provide useful information are afraid. The fliers that the family circulated last month acknowledge as much, concluding with a handwritten couplet that may, at first, appear contradictory: “Don’t be afraid! / It could happen to you!” The fear in the community is, in fact, certain to allow further violence which may reach those withholding information.

This article originally appeared in the October 30, 2008, issue of tmiWeekly.

Roxanne Zwiesler enjoyed life surrounded by friends and lovers, many of whom were well known in Topeka. She had turned 39 and left behind her a whirl of nights at upscale clubs and exclusive parties, venues at which all eyes focused on her. Her allure was due in part to her statuesque beauty--she stood five foot nine in flats and always wore heels--but she also had a reputation for informed, frank, and wildly funny conversation. On June 13 or 14 in 1994, Roxanne’s life ended, and the friends and lovers with whom she had shared so many good times found themselves suspects in the investigation of her murder.

Roxanne spent most of what was to be her last day--Monday, June 13, 1994--at work. The same qualities that had made her social life fl ourish had also helped her career. She had a degree in business from Washburn and an impressive resumé but had settled into a job she loved. She worked in the lingerie department at the Jones Store where she had a reputation for helping women flatter themselves and men do the same for their wives and girlfriends.

That day, someone phoned Roxanne at the Jones Store. A nearby coworker heard her say, “Now I’m in trouble.” The remark may have had an innocent explanation but would seem ominous in the future.

That evening, Roxanne went to dinner with a friend and arrived home at about ten. Three-years divorced, she resided alone in the Brandywine Apartments, near the intersection of 25th and Wanamaker. Her second-floor apartment overlooked an adjacent parking lot to the south. Friends dropping by for a visit often parked there, cutting across the grass to Roxanne’s building. It was, in fact, easy to do so without being seen.

A woman who had the apartment west of Roxanne’s said she heard a disturbance later that night, but she was unable to be more precise. A man who lived in the apartment to the east did not hear anything.

Roxanne had the next day--Tuesday, June 14, 1994--off from the Jones Store and planned to meet a friend for coffee that morning and drop by her sister Rhonda’s house that afternoon. She did not show up at either engagement. When her friend and then her sister called to find out why, they got a busy signal--repeatedly.

Roxanne’s family had always played a vital role in her life. She had three brothers--Bob, Joe, and John--and three sisters--Teresa, Rhonda, and Michele--who were as much a part of her social calendar as her newsworthy friends. At that time, none of her siblings was more involved with Roxanne than Michele, the youngest in the family. When Roxanne’s line continued to be busy,
Michele went to check on her.

As Michele waited for the light to change at 29th and Wanamaker, images of the unthinkable fl ickered in her mind. She pushed them aside. After all, the odds were that something had come up and Rox, as Michelle called her, had taken off on some adventure, not noticing that she had knocked her phone off the hook on her way out the door. Michele turned on 27th, parked in the empty lot, and hurried to Roxanne’s apartment.

The second she touched the apartment door, the reassurance she had mustered in response to her fears faded away. With a slight push, the door swung open--it had not been latched. A note a friend had left wedged against the jam fl uttered down to the welcome mat. Michele called out her sister’s name. There was no response.

Inside, Michele saw a laundry basket on the living room fl oor. A couch that normally sat against a storage closet had been pushed out, and the closet door was open. Michele entered the bedroom, and the unthinkable became real.

Roxanne lay unclothed on the bed. She had been shot in the head.

Michele ran to the apartment next door, and the man living there dialed 9-1-1. In minutes, police swarmed on the scene. One of the patrol cops pointed out that the screen on the front window had been slit.

Later, as detectives examined the scene, they discarded initial impressions that Roxanne had fallen victim to an intruder: the slit in the screen had been made from the inside. The killer had probably cut the screen to make it appear as though a break-in had occurred. He had left the closet door open to make it look like he had been hiding inside. Roxanne had known the person who took her life.

Based upon this deduction, the ensuing investigation focused on the men in Roxanne’s life, all of whom were prominent Topeka professionals. One took a lie detector test which he passed. Another had his office searched, and nothing was found. Detectives never settled on a particular suspect, but their inquiries revealed that recreational drug use played a role in the night life of Roxanne’s social circle. The media reported this fact, and speculation grew that the murder had been drug related.

The investigation’s focus on Topeka’s drug culture yielded no results. The feeling that Roxanne’s murderer would go unpunished grew. Though the killer was in all likelihood a man still prominent in local society, the case went cold.

Roxanne Zwiesler remains alive, still vivacious and elegant in the memories of those who knew her. Unfortunately, her killer is probably still alive too, and may very well be in Topeka.

If you have any information that could help bring him to justice, please contact the detectives at the Topeka Police Department at 368-9400.
Posted by Paul Fecteau at 3:49 PM 1 comment: