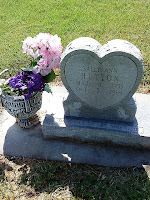 What about the guy in the car that people saw her leave the game with? You said that there were descriptions of each... I take it that they either never figured out who that was or they cleared the guy and it happened after he left her. I heard a rumor that they were interested in Yorky Smith after he committed those other murders in 1982.

Having grown up near Iola, I am shocked I had never heard about this, prior to reading about it today.

I grew up in Iola and I, too, had never heard of these murders. This is my take, which is based just on the information in this article:

The two witnesses were likely mistaken
In Iola, like any small town, everyone knows everyone else. So it's odd to me that the two witnesses who saw Sally enter a vehicle with a young man (unsub) did not know the man or recognize the vehicle. To me, this indicates that: (1) the unsub was not from the area (possible but unlikely); (2) the two witnesses withheld information (highly unlikely); or (3) the witnesses wrongly identified Sally as the individual entering the vehicle (the most likely as eyewitness testimony can be highly suspect).

As to the comment about Yorkie Smith, I would think that the witnesses would have identified the unsub as a black male. Iola is not very diverse, and this would have been notable in 1960's Iola.

Why "lover's lane?”
The fact that Sally was unceremoniously dumped in an area that was known as “lover's lane,” could indicate a number of things. First, the unsub likely knew the area, as it was a remote location. But it was not too remote as to call into question the unsub’s whereabouts (“where have you been all night?”).

The unsub likely knew it was "lover's lane" (i.e. quiet place to be alone and dispose of a body). A perfect location to quickly dump a body without being seen.

Sally’s body being dumped in a ditch indicates that the crime wasn’t planned. If you are going to plan a murder, it’s likely that you’ll have a plan to hide the body. The lack of a body makes it difficult, but not impossible, to prove a crime.

The article indicates that Sally was not murdered at “lover’s lane.” This calls into question the idea that it was a lover's spat (i.e. unsub takes Sally to “lover’s lane,” she says no, and he flips out). But the spat could have occurred elsewhere, and it was simply a convenient location to quickly dump the body.

No sexual assault
There was no evidence of a sexual assault, but she was bludgeoned, which makes me question the unsub’s motive. The unsub took a deadly weapon and swung it at Sally (maybe even with her watching him) a number of times. There’s a lot of focused anger there (it could indicate a sadistic serial killer, but those are rare).

Could it be an accidental crime by a stranger?
As an aside, one scenario could be that Sally was killed by a drunk driver (or any other accidental death), who then attempted to dispose of the body. But this is called into question by the fact that Sally’s injuries appeared to be more than just a car accident.

Sally likely knew the murderer
Even ignoring the above analysis, statistics suggest that it is highly likely that Sally was murdered by someone she knew: a family member or friend.

Could it be solved?
If the unsub is from Iola, there is likely someone in Iola that knows what happened. Rarely are people able to keep a secret (alcohol opens the mouth). So, even if the unsub has died, someone might still be alive to tell the tale.

It's mentioned in the Iola Register archives and both were buried in Highland Cemetery. You can find their tombstones on www.findagrave.com. https://newspaperarchive.com/iola-register-feb-07-1998-p-1/

Why can't they do DNA testing as DNA has come very far these days they may be able to find a relative of the murderer that could lead to who the murder was.

There has been numerous murders and cold cases in allen county. Yorky was cleared of this i have done years of research on these two

Has anybody considered charles ray hatcher. I believe he was in allen co jail at this app date. He did confess to numerous murders before his death in 1984.

You asked about DNA testing & possibly finding a relative of the murderer. Well, to answer that, to compare DNA to a potential killer or sibling of the killer, they would have to have DNA to test. Why not do like I did & post a 50 year memorial post in Sally's memory on their social media. It's a long shot, but maybe the killer or someone who knows who the killer was, will be willing to talk.

To unknown who posted on Feb. 24, 2019. It wasn't Charles Ray Hatcher as he was sitting in jail at that time in CA for beating & sexually assaulting a young boy.

I am deeply saddened by the tragedy.

Also. He was a one friend of somebody close to me for YEARS....trust me, if he would've told anybody, it'd have been them

Some of the evidence has been “lost”. Sally was my Aunt. The police at the time didn’t care about finding her killer &/Or we’re covering for someone

Thank you I wish I could see your post. Sally was my aunt

Evidence was found in an apartment not long ago (KBI). Maybe the murders were connected. Two murders only a few days apart is a big thing in a small town. Lots of speculation occurred, lots of rumors, but bottom line 2 people lost their lives. How sad.

Could someone please delete the post by anonymous dated November 16, 2020 AT 8:13 AM. I don't think a description of various dog breeds, in Spanish, belongs on this blog. Thank you.

To Lisalp, perhaps sending info on Sallie's case to this org. could help. That is what they do best, help solve unsolved homicides. It sure can't hurt. https://www.coldcasefoundation.org/cold-case-application.html

The murder cases of Sally & Betty Cantrell were not related. I've provided a lengthy comment about Betty's killer, Joseph "Jack" Shoemaker, before in this forum. He was murdered in St. Louis in 1977. He is back in Iola, buried in the military section at Highland cemetery.

I have posted the article on Reddit so please go to the link and follow so we can get this case seen. https://www.reddit.com/user/susang0907/comments/tt92yr/unsolved_1969_murder_of_sally_ann_hutton_in_iola/?utm_medium=android_app&utm_source=share


Are you saying the family or cops are closing the case on Sally's murder? If so, why?

In every article or blog I've read about Sally's murder, they always mention that a description of the guy & his vehicle. Why hasn't that info been released to the public? Even after all of these years, it would surely jog someone's memory as to who drove a vehicle like that, esp. if the color of the vehicle is provided. I can't believe that after all this time, it hasn't been released or the info given to the FBI cold case division. Has Sally's family ever asked to review the file? It doesn't hurt to ask. Having personally seen how they messed up Betty Cantrell's murder, which allowed her killer to go free, nothing surprises me. LEO had been given info that Jack Shoemaker's mother was destroying evidence and where, they still messed things up, (not reading him his rights before questioning him) which allowed him to go free. I know growing up, he scared the heck out of me (think of the creepiest version of Boris Karloff) & I avoided his mother's house like the plague.